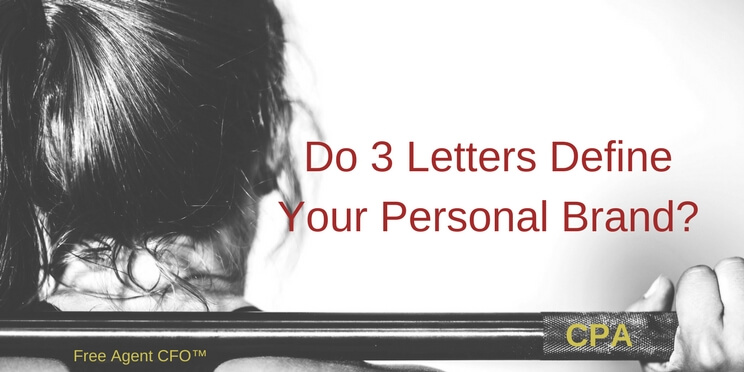 When I started my CFO and controllership practice in 2001, I included the CPA designation after my name. Besides, I earned those 3 letters the hard way.

Little did I know that one of the most recognizable credentials in the world could unfavorably impact my brand image, or so that was my perception.

Wearing Those 3 Letters Is a Rite of Passage

I took the CPA exam in the late 80’s by cramming for just the Practice Section one week before and during the test. I didn’t even crack open a book for the other three parts of the test (commercial law, auditing, and accounting theory). My reasoning was that I could get a 75 on Practice and score at least a 50 on the other three sections.

My strategy worked. I passed the Practice Section and obtained 50’s on the other parts. So that meant I could keep one section and work on the next three a few months later.

The following spring, I once again took a week off before and during the exam. My cram sessions worked as I passed those three sections too. No, I don’t recommend this for anyone. I was busy working and already raising a small family, but I could see no other way to pass the exam. I just needed to minimize the time I put into studying.

One of the managers at KPMG Peat Marwick said that I belonged to an elite group claiming I was a member of the exclusive 300 Club. That’s funny, I never finished a baseball season hitting over .280 in my career. Wrong 300 Club. Joe Hopkins called the 300 Club a group of accountants scoring 75 on all 4 sections of the exam.

Regardless, I earned my stripes, and I purposely included those three important letters after my name on my first business cards. Those 3, seemingly-innocent letters meant I survived 4 tortuous and grueling weeks during a time when I started wondering if flipping burgers would be a better way to make a living, and certainly less stressful.

Why I Ultimately Decided To Drop the CPA Designation

Everyone from family members (especially my mother), bankers, and other professionals in my small marketing peer group considered me a tax guy just like every other CPA they knew. I’m not sure why, but that bothered me a lot. I don’t even like taxes. Plus, tax people don’t have any marketable skills like we do. I got tired of being associated with taxes and being thought about as just a numbers guy.

And so I did it. I dropped the letters. And I’ve never looked back.

Plus, I have to since I no longer renew my license annually with my state’s licensing office. But I still obtain my CPE credits, some 200 every year (that’s no typo).

However, the sardonic part of me wants prospects to know the agony I suffered through during my boot camp years at KPMG to earn the revered credential.

Accordingly, I state that I passed the CPA exam while working for KPMG in St. Louis in my LinkedIn profile and personal bios that are requested periodically. That statement achieves several purposes–that I passed the exam, who I worked for, and where I worked early in my accounting career.

Should You Drop the CPA Designation?

I enjoy doing high-impact, project-oriented work for CEO’s. When they see that CPA designation, I do not want them thinking I’m some tax guy with other business skills. Thus, my decision to do so has never hurt my practice.

Does it bother me if I see you, a part-time CFO, including the designation after your name? Not at all. It’s your business and a personal decision. But now, you have another option.