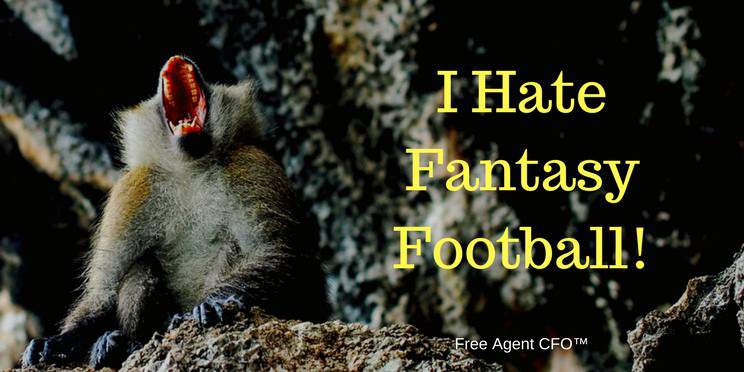 Nearly 60 million men and women play fantasy football and one organization estimates the average player spends more than $600 annually on this intoxicating indulgence.

Thanks to my youngest son, I too play in a fantasy league. To plagiarize Tony Horton regarding his sadistic Ab Ripper X routine, “I hate it, but I love it.”

I finished third in my league which isn’t too shabby for a rookie. But I’m so glad it’s over. I don’t think I could stomach another week.

Looking back over the past season, I started to realize there are some similarities between fantasy football and business. Is that a stretch? Not really.

Pull out your business buzzword bingo card. You could probably use it for fantasy football too. Consider the following terms:

You see, the comparisons exist. But I can do better. Below are the 7 fantasy football lessons that I have uncovered that apply to small business.

1 – You Can’t Control the Outcome, Just the Process

Fantasy football is frustrating if you like to win. I found myself in a foul mood whenever I was losing, which seemed like a lot.

How does Cam Newton score 30-plus points one week and let you down with a dozen a few games later? Adam Thielen, my squad’s break-out player, where were you the last two weeks? Golden Tate, you break my heart.

Losing also happens at the office, in the sales field, during a botched AdWords campaign, on the plant floor when a batch is spoiled, or when missing out on that gifted candidate for a key position.

While we need our lofty goals to push toward, more importantly, we have to control what we can. We can control the process, not the outcome. If you don’t like the outcome, change the process.

I’ll never understand why some business owners never share key numbers in their business like unit sales, sales dollars, gross margins, or controllable expenses. Name any department in any business, and you’ll quickly identify the numbers needed for that team to win. Where’s the scoreboard, or should that be Geckoboard?

Gamification works. Imagine playing fantasy football without scoring where there are no wins, no player results, or no standings. Borrrrrrrrrring. That’s worse than losing.

Fantasy football is all about the numbers. Any non-college educated young man or woman can figure out the scoring system in minutes. Those numbers drive them to win. Business owners need to take a cue from fantasy football leagues. Want engaged employees? Turn the business into a game. Madison Avenue, here I come–Get a Geckoboard.

3 – Sunk Costs Stink, but the Past Is the Past

I’ve been in the CFO consulting business since 2001. I’ve worked with owners who have made questionable secondary investments outside their area of expertise. While I want them to cut bait, they want to but can’t. Mysterious forces are holding them back. They want back that original investment after suffering a 20%, 30%, or even 50% setback, sometimes more. It ain’t happening. It’s a sunk cost. Sell and move on.

Similarly, fantasy football can drive a person crazy by trading for a player who starts declining immediately. Or perhaps a benched a player winds up scoring 30 points, the difference between winning and losing that particular week. Sound familiar?

Once you make a decision, you have to live with it, then move on. Similar to sunk costs, old decisions are sunk decisions. Learn from the past, don’t dwell on it. Move forward.

Julio Jones had the game of a lifetime during the 2017 season when he had 253 receiving yards, 12 catches, and 2 touchdowns giving him 50.8 fantasy points. Insane.

Still, want Jones on your team? His average was about 15 points per game. In 10 games, he scored below his average over 16 contests. He posted low scores of 4.4, 6, 8.4 during the season. The dotted lines below represent 3 standard deviations from the average meaning there’s a 99.7% chance he was (in hindsight) going to score between 5.34 and 26.15. I don’t like that range. 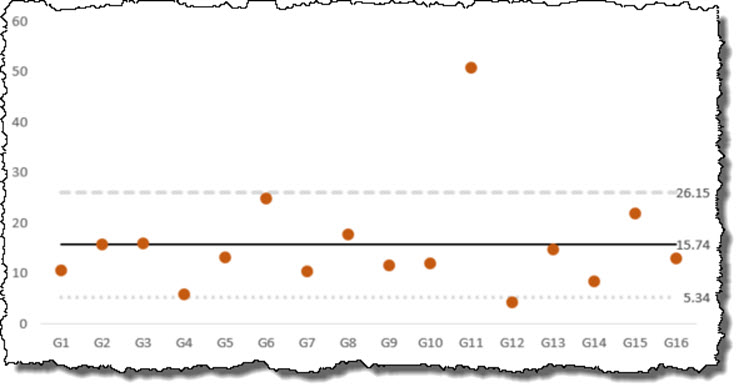 I don’t want periodic great. I want repeatable good. Julio is the sexy pick to have on your team. But if he exists, I’d rather have the receiver where there is a 99.6% chance of him scoring between 14 and 16 points every game.

If your clients have sales and earnings bouncing around all over the place, it’s because their systems, processes, and practices are not consistent. Even if they have a good month, the results will not be sustainable.

I’m thrilled that I finished third, but I didn’t like the stress that came with scoreboard watching from week to week.

Instead, I had pretty decent players up and down my lineup. My bench was loaded with receivers that could put up double-digit points too.

Just like in business, you don’t need A-players. Small business owners need a team of B-players that can be mentored and coached to A-status. Be careful, A-players can be high maintenance too. Plus, one or two A-players cannot compensate for a supporting cast of poor-performing C-players.

6 – Quit Stressing Over Too Much Data

I’m a Kolbe Certified™ Consultant, so I fully understand the mind of an initiating fact finder. They want their facts very well done seeking every bit of data and information they can find when making a decision. A little overdramatic? Possibly.

If you fall into the camp of needing 23 opinions on which running back to play next week, quit doing that.

Number 3 kept telling me to just have fun. Yeah, right. Easier said than done, plus he’s just a kid. I’ll try next year.

At the end of the day, business is not the end, it’s a means to what really matters in life. Accordingly, there are times business owners need to chill out, and that goes for the staff too. Have fun too.

I Hate It, But I Love It

So tell me, is Tony Horton really talking about fantasy football?

I’m not the only one who needs to come clean. See which person you relate to the most.