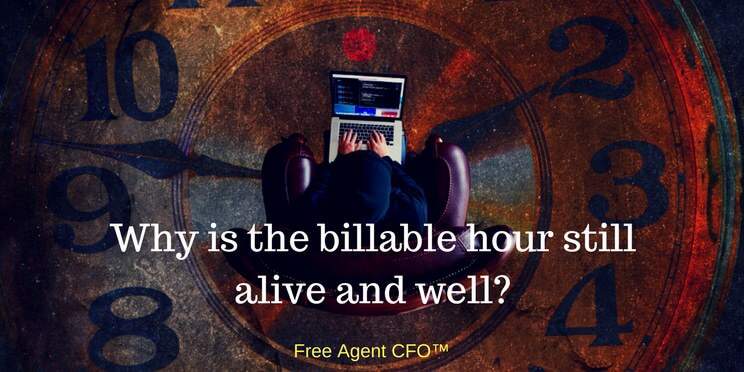 I don’t bill by the hour. Hourly billing is just really, really senseless. We’re the best CFOs in the world. Why give away value by becoming a professional services prostitute?

What side of the bed did I wake up from? The right one, the same as always.

Let’s start with transparency. I’ve billed a few clients by the hour, and I can probably count on one hand the number of times I’ve done so.

Here’s what I learned from that very first experience:

The manner in which I billed and got paid by this first client was the greatest MBA education I ever received. Incidentally, MBA stands for Masters of Billing Amateurishness.

I Still Did Some Hourly Billing Throughout the Years

I didn’t start consulting full time until 2001. During the first three months, only one of those clients was billed by the hour.

During that first wave of clients, it was an attorney of all people who recommended that I bill a client whom he referred to me $1,750 per month. I liked that because I hated billing, and I hated trying to track time even more so–what a waste.

At about that juncture, I probably only billed clients by the hour 2-3 times over the next 15 or so years.

Do I have dogmatic views about billing by the hour? Maybe, but I have kept my opinions to myself (until now). The only exceptions I make are to the CFOs that I coach and mentor. The reason I don’t make a big deal about the billable hour is that some people have to figure out things on their own as I did.

I never knew there was a push to value billing by a few leading experts at the time. Around 2003 or 2004, I ultimately read Baker’s and Dunn’s Firm of the Future which addressed billing by the hour. Their feedback validated my thinking.

I have deeply and closely-held core values that I cherish and protect. Those same guiding principles drive the way I deliver and capture value to and from the clients I serve:

Why You Bill by the Hour

I believe there are two reasons–three at the most–why you continue to bill by the hour.

First, you do it because it’s both easy, and your client lets you get away with the practice. They don’t know any better, and because it’s easy, you keep doing it.

And the final reason is that you are driven by fear. I base my practice on courage, excitement, and adventure. Fear is no longer my motivator. But is fear driving you to bill by the hour?

Is billing by the hour your form of risk management? What I mean is that taking too long to wrap up work is paid for by the billable hour. That’s the safe way to bill. Does that make it right? You need to answer that from the client’s perspective, not yours.

Where Do We Go From Here?

Years ago, a CFO called me because her mentor was chiding her for marketing a new project at just $100 per hour.

Her mentor was an incompetent fool. But I didn’t tell her that. First, I clearly explained that her CFO business was her business, not the business of another consultant and certainly not mine. This CFO happened to be a single mom, so you can understand why I might have been a bit livid by the inept advice she received.

Where the CFO missed the boat was that she unwittingly and unknowingly put the project’s focus on cost, not the end result. Based on what I heard, a solutions-based approach for $2,500 billed over three months might have worked.

If the CFO’s prospect turns down the project, the comeback is, “What part of the solution that will save you $100,000 in extra costs don’t you like? Perhaps we can whittle down the scope of the project, but the end results will be lower.”

The goal here is not to be coercive or manipulative. Great CFOs never do that. We’re just guides to help CEOs to get from point A to point B which will lead to greater economic value in their businesses.

I can’t tell you that you need to quit billing by the hour. Neither can Ron Baker or any other gifted thought leader in this domain space. You have to figure this out on your own. But do one thing for me–please do this by thinking about this from the client’s perspective.